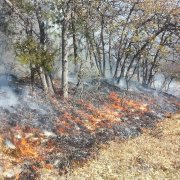 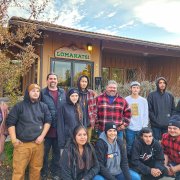 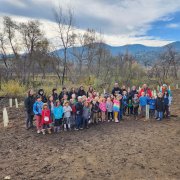 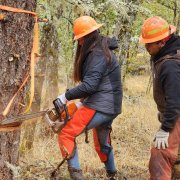 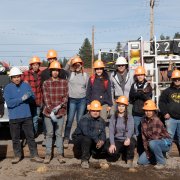 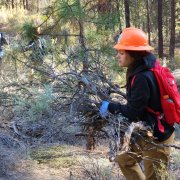 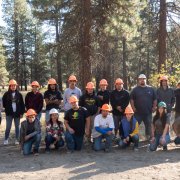 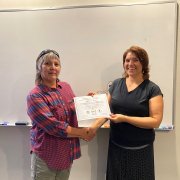 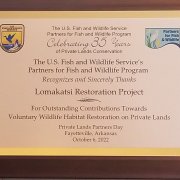 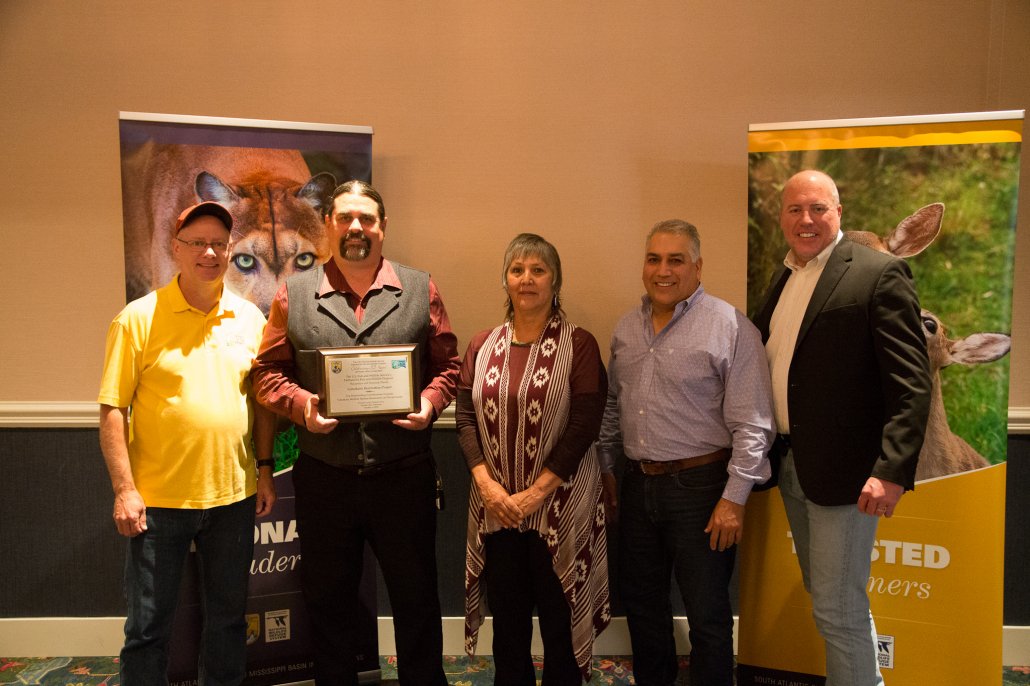 Ashland, Oregon – Lomakatsi Restoration Project, an ecological restoration nonprofit based in Ashland, Oregon, was selected for a national award last week from the U.S. Fish and Wildlife Service as part of the 35th anniversary celebration of the Partners for Fish and Wildlife Program. The award recognizes Lomakatsi’s partnership with the USFWS through this program for over two decades, working with over 200 landowners and accomplishing thousands of acres of ecological restoration on private lands throughout Oregon and northern California.

Lomakatsi Founder and Executive Director Marko Bey and Tribal Partnerships Director Belinda Brown, an enrolled member of the Kosealekte Band of the Ajumawi-Atsuge Nation (federally recognized as the Pit River Tribe), received the award Thursday, Oct. 6, as part of the Partnerscapes Private Lands Partners Day 2022 in Fayetteville, Arkansas. The gathering included over 150 landowners, national and regional leadership from the USFWS and other agencies, and nonprofit partners with a focus on building collaborative conservation projects on working lands across the country. One award was given for each USFWS Region, with Lomakatsi representing Region 1, which includes Oregon, Washington, Idaho, Hawaii, American Samoa, Guam and the Northern Mariana Islands.

“Since 2000, Lomakatsi Restoration Project has been a remarkable partner of the U.S. Fish & Wildlife Service, working to restore forests, streams, and riparian habitats that can be connected to other projects on private, tribal trust, or federal lands to achieve landscape-scale results,” said Cynthia Martinez, Chief of the USFWS National Wildlife Refuge System. “Working together, we are able to leverage resources and expertise into projects that meet the diverse needs of local communities and jurisdictions, while promoting ecocultural values. With an all- lands restoration approach, we maximize the benefits to wildlife habitat and reduce the risk of wildfire on a landscape scale.” 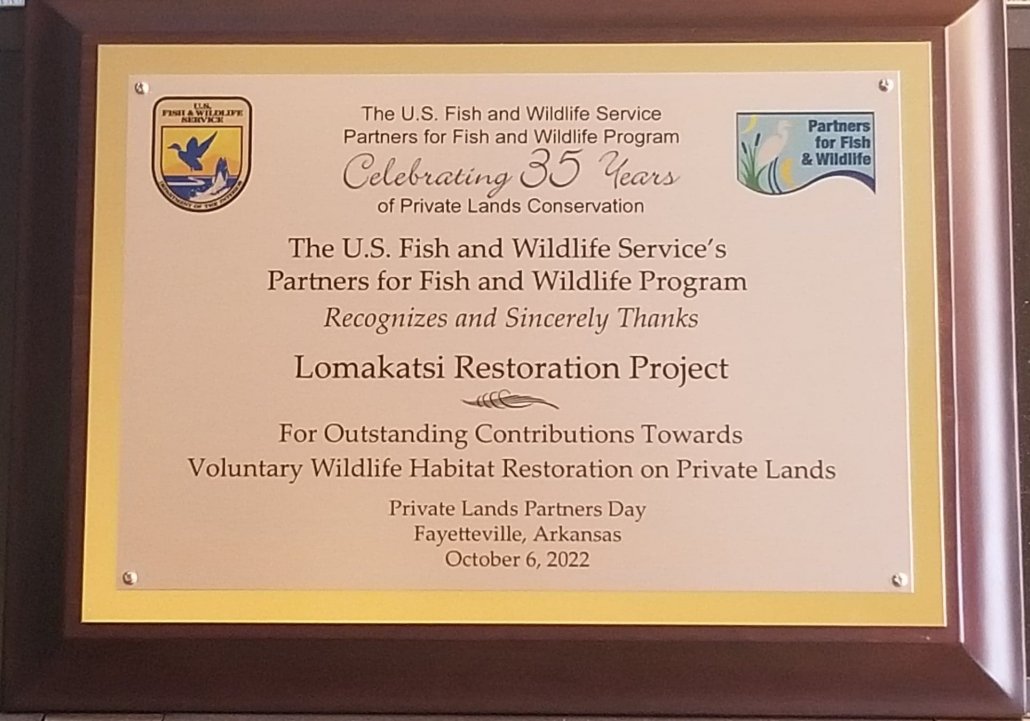 Lomakatsi’s involvement with the USFWS Partners Program began in 1999 with the nonprofit working on stream habitat restoration projects in the Klamath Basin. From 2010-2015, Lomakatsi served as lead sponsor of the Central Umpqua-Mid Klamath Oak Habitat Conservation Project through a Collaborative Conservation Partnership Initiative funding award. This partnership between the Natural Resource Conservation Service, Klamath Bird Observatory, and USFWS and Lomakatsi implemented strategic habitat restoration across hundreds of acres of private land in Douglas and Jackson counties in Oregon, and Siskiyou County, California.

The USFWS Partners Program has also been a key partner in expanding the Ashland Forest Resiliency initiative from the original footprint of federal and city lands to adjacent private lands, increasing watershed health, protecting habitat for threatened and endangered species like the Northern Spotted Owl and reducing the risk of severe wildfire—to create ecosystem resilience across the landscape. Core AFR members City of Ashland, Rogue River-Siskiyou National Forest, Lomakatsi, and The Nature Conservancy, working with many partners, have treated 13,500 acres in and around the Ashland Watershed since 2010, with 6,000 of those acres on private lands.

“The USFWS Partners Program has been a tremendous ally in accomplishing much needed habitat restoration and ecological fuels reduction treatments on private lands, strategically integrated with collaborative, landscape-scale watershed restoration initiatives,” Bey said. “Their knowledge, expertise, and funding has been essential in increasing the connectivity of treatments across all-lands, enhancing benefits to wildlife and communities, while working directly with private landowners.”

Now, USFWS and Lomakatsi continue their collaboration through Rogue Forest Partners, a group of four nonprofits and six public agencies bringing AFR’s nationally-recognized collaborative forest restoration model to six more project sites across the Rogue Basin. One such site, the West Bear All-Lands Restoration Project, focuses mainly on ecologically-based fuels reduction treatments on private land in the wildland urban interface of the Rogue Valley, adjacent to seven of the 30 most at-risk communities to wildfire in the entire state. 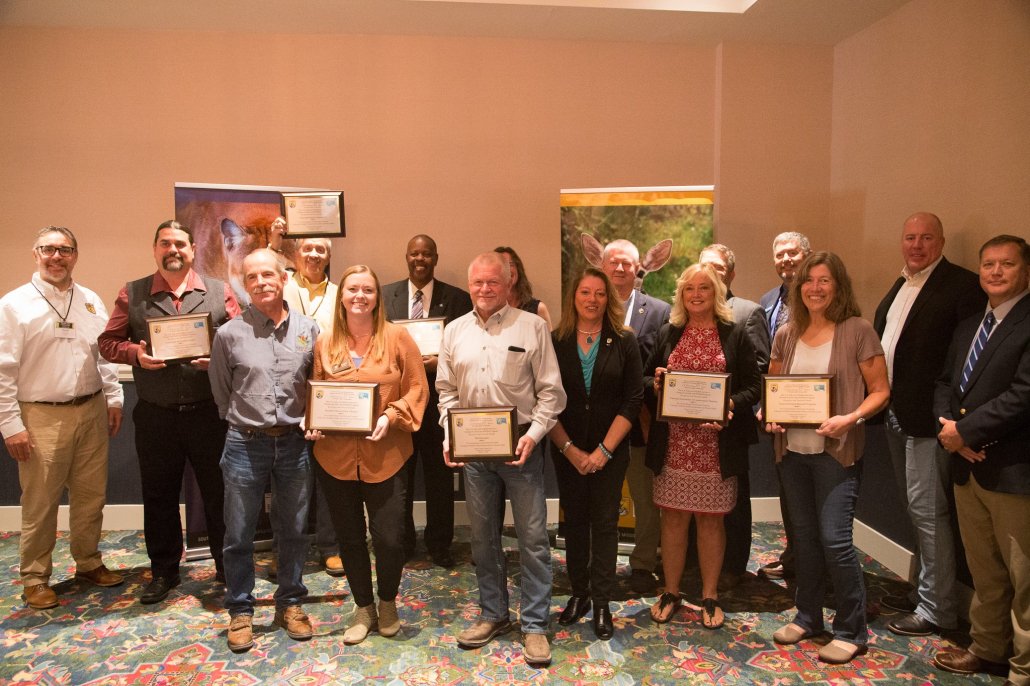 “Lomakatsi has served as a trusted long-term partner of the U.S. Fish and Wildlife Service, bringing technical expertise and implementation capacity to private landowners to accomplish significant habitat restoration,” said CalLee Davenport, Oregon State Coordinator for the USFWS Partners for Fish and Wildlife Program. “Together, we’ve restored thousands of acres of private land habitats—and now we look forward to our continued partnership on the West Bear project aimed at reducing the risk of severe fire to forests and communities through an ecological fuels reduction approach across a 27,000-acre project area.”

Lomakatsi thanks Partnerscapes, a landowner-led organization dedicated to collaborative conservation initiatives on working lands across the country, for hosting the week-long workshop and the USFWS Partners Program for their long-standing support and collaboration. 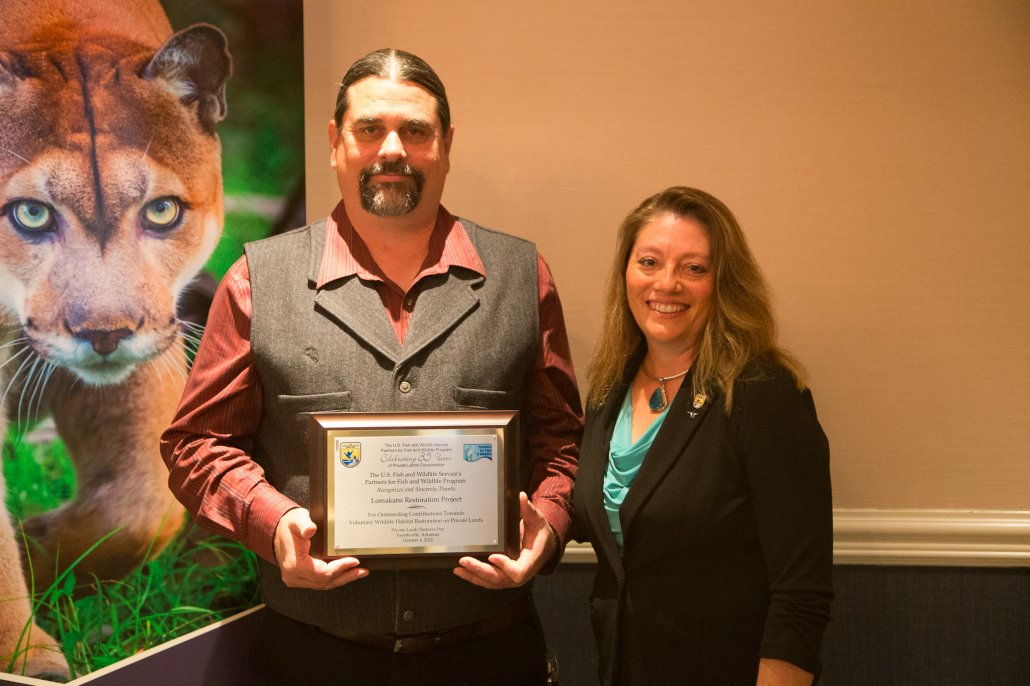 About the Partners for Fish and Wildfire Program

The Partners for Fish and Wildlife Program provides free technical and financial assistance to landowners, managers, tribes, corporations, schools, and nonprofits interested in improving wildlife habitat on their land. Since 1987, we have helped more than 60,000 landowners restore more than 7 million acres of forest, prairie, wetland and stream habitat for wildlife. Learn more at https://www.fws.gov/program/partners-fish-and-wildlife. 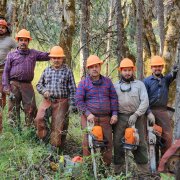 Your support makes a difference

Restore ecosystems and the sustainability of communities, cultures, and economies.

We acknowledge that Lomakatsi operates programs across the ancestral lands of aboriginal peoples who lived and live in the watersheds of the Willamette River, Rogue River, Klamath River, Umpqua River, and Pit River, in what is now called Oregon and California. From sagebrush hillsides and mixed conifer forests, to oak woodlands and riverine systems, we offer our respect, recognition, and gratitude to the original past, present, and future inhabitants of these landscapes, to whom we dedicate this work.